Provisioning is the process of setting up IT infrastructure. It can also refer to the steps required to manage access to data and resources, and make them available to users and systems.

Provisioning is not the same thing as configuration, but they are both steps in the deployment process. Once something has been provisioned, the next step is configuration.

Server provisioning is the process of setting up a server to be used in a network based on required resources.

Provisioning can encompass all of the operations needed to create a new machine and bring it to a working state, and includes defining the desired state of the system.

Server provisioning includes setting up the physical hardware in a datacenter, installing and configuring software, including the operating system and applications, and connecting it to middleware, networks, and storage. 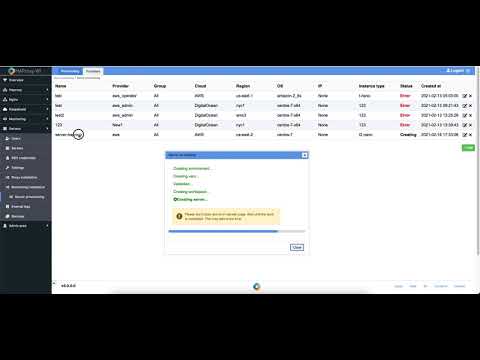 Since version 5.0 HAProxy-WI can provisioning virtual servers for you via web interface. Virtual servers can be provisioned for the most popular cloud provider as: AWS and DigitalOcean. (The list will grow with time)

HAProxy-WI provides ability to set options for an instance like: instance type(size), SSH keys, use or not Elastic IP(Floating IP), Operation system, etc

How to install Terraform you can read here. Version of Terraform is supposed be more than 13.0

What exactly is being created

HAProxy-WI creates only needs resources for creating servers, like:

HAProxy-WI uses Terraform to provide servers. The source code is stored on the GitHub repository (select the branch you want), so you can read it and make sure it is safe to create servers.

After you created provider Keys and Tokens never expose on HAProxy-WI pages. When it changed a form consists empty input. Keys and Tokens do not relays between users and server at all. It is safe as safe Database for HAProxy-WI.

All states are stored locally. Access from anywhere is closed. It can be accessible only from HAProxy-WI server. It means that nobody will not have an ability to read states, only if they have SSH access to the HAProxy-WI server

During provisioning can appear some issue. All known issues collects here. If you have faced with issue what is not here, write to us.

This error often appears because there is not enough RAM on your server. Increase RAM or add SWAP file to solve this error

It means that there is not Terraform installed. How to install Terraform you can read here.

Go to UP
Go back